Our Spotlight on Environment highlights some of the work we’re currently doing to protect and enhance the natural environmental and social values of our road network.

Air quality in Perth is generally of a high standard compared with other Australian and international cities. Levels of pollutants have all declined due to tightening of national vehicle emission and fuel standards and the management of industrial, commercial and domestic air pollution.

The impacts of new roads and major roads upgrades on air quality are assessed in accordance with the requirements of the Environmental Protection Act 1986.

A number of initiatives have been undertaken that contribute to the reduction of emissions, which include:

Strategies that reduce congestion and improve network efficiency will result in improvements to air pollution caused by vehicle emissions due to enhanced traffic flow.
Artificial hollows for Carnaby Black Cockatoos 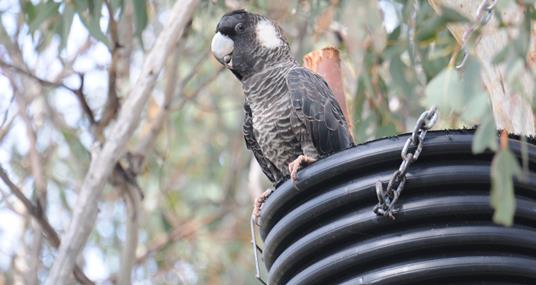 Artificial hollows are constructed from lengths of pipe or timber and installed high in trees to provide additional breeding opportunities for black cockatoos. Research has shown that artificial hollows, if correctly located, have a greater success rate of breeding than natural hollows. Learn more about the findings on the Birdlife Australia Breeding Report.

Our first hollow was installed along Great Northern Highway at Bindoon in 2006, and to date we have now installed 139 hollows, with monitoring showing that black cockatoos will lay their eggs in artificial hollows.

Learn more about black cockatoos and how the design has been refined over the years, visit the Parks and Wildlife Service website. 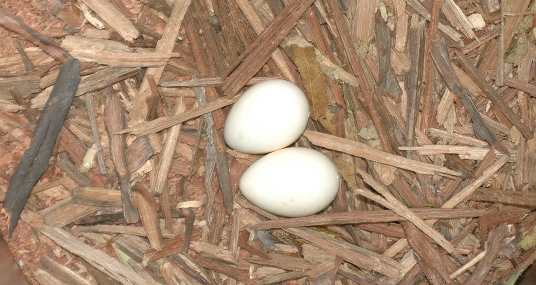 Each cockatoo species is classified as conservation significant fauna by both the State and Commonwealth governments.

We are currently supporting important research into all three species by the research team at Murdoch University, lead by Professor Kris Warren.

The research will provide important information to assist in the management of the three species by government and community groups.

Finding out how to eliminate dieback

Dieback is the name used to describe the plant disease caused by a soil-borne pathogen, Phytophthora cinnamomi.

Dieback kills up to 50% of plant species in Western Australia by attacking plant root systems, including common plants such as jarrah, grass trees, banksia, hakeas and grevilleas. The disease causes root rot, stopping the uptake of water and nutrients. The pathogen spreads via root to root contact, through infested soil and plant material and via surface and sub-surface water flows.

We support research into Dieback Eradication projects in collaboration with the Department of Biodiversity, Conservation and Attractions. Learn more in our Fact Sheet.

They often include fauna furniture such as logs or hiding spots, and a dirt base so animals feel comfortable using them.

We constructed 12 fauna underpasses in a recent upgrade of Tonkin Highway and have monitored the use of fauna bridges by Western Ringtail Possums. Read more about them in our Annual Report.

Learn more about the Design of Fauna Underpasses in our Technical Library.

Noise impacts from new or upgraded roads are managed in accordance with  State Planning Policy 5.4 - “Road and Rail Transport Noise and Freight Considerations in Land Use Planning”.

As part of preparing information for the environmental referral and assessment process, we undertake noise monitoring to calibrate a noise model, assess noise impacts, and ensure that our projects are completed and they compliant with the Policy. This includes obtaining base line noise levels from monitoring noise levels at key points within the project alignment. In some cases noise monitors are placed on a resident’s property.

The data is then input into a modelling system and also takes into account a range of other variables, including:

The findings are considered by project stakeholders to help determine the most effective noise mitigation strategies for each project. Noise mitigation can take a variety of forms, including construction of noise walls and/or bunds, architectural treatments to nearby homes and utilisation of ‘quiet’ pavement/road surfaces.

After constructing a new road or upgrading a road, we undertake monitoring to ensure our projects comply with the State Planning Policy 5.4, and will seek to implement further measures as required if noise levels continue to exceed the limits of the Policy.

We provide advice on traffic noise considerations to Local Governments and land developers to help ensure compatible land use development. The minimum standards expected from acoustic assessment reports are outlined in our Requirements for Road Traffic Noise Assessments Fact Sheet.

We recognise that noise from the construction and maintenance of roads can be a concern for people living adjacent to the road network. We aim to provide an efficient road transport network for the State while minimising noise impacts to the community. Learn more about how we manage noise from construction and maintenance activities in our Fact Sheet.

Whilst we strive to meet road safety requirements and our environment objectives, it's not always possible to avoid clearing or other environmental impacts. All avenues to minimise the impact are investigated, but where this is not possible we will seek to offset these impacts.

We work closely with the Western Australian Department of Water and Environmental Regulation (DWER) and Department of Biodiversity, Conservation and Attractions to identify suitable offsets.

Offsets that are a condition of an approval under a Clearing Permit or s38 of the Environmental Protection Act, are listed on the State’s Environmental Offsets Register on DWER’s website.

For further information about offsets, please visit our Annual Report.

A key consideration in the planning and development of the Bunbury Outer Ring Road project was to contribute to the protection of one of WA’s most endangered marsupials – the Western Ringtail Possum, also known as Ngwayir by the local Noongar people.

Unique to the South West, the Western Ringtail Possum is classified as critically endangered. Common in the urban areas around Busselton and Dunsborough, the estimated population of the species in 2014 was just 3,400 adults. However, the population estimate was based on very limited information. The species ranges from south of Mandurah, throughout the southern Swan Coastal Plain to Augusta, and through the southern forests to Albany.

We worked closely with the Western Ringtail Possum Recovery Team and the Department of Biodiversity, Conservation and Attractions to design and undertake a survey over the entire area that possums occur. This included extending the survey well beyond the BORR project area to cover the entire South West Region from Binningup to the Capes, southern forests, and Albany regions.

Over a twelve month period, we worked with consultancy Biota Environmental Sciences to walk 1,287 kilometres of transects, over an area of 114,234 hectares, to survey Western Ringtail Possum populations at over 40 sites. Due to access and logistical issues, surveys were not undertaken in urban or agricultural areas, or along forest rivers.

A transect is a straight line through an animal's habitat through which the team travels, recording possum sightings along the way. Transects were spaced closely together (75 metres apart) to ensure no animals were missed, while ensuring that individual possums were not detected at neighbouring transects. As possums are a nocturnal animal, transects were walked at night for approximately 6 hours.

Each member of the survey team walked alone to minimise disturbance to the possums and was tracked using GPS to ensure their safety and to accurately record sightings of Western Ringtail Possums.

Data verification occurred each day and, after analysis, we were able to calculate highly accurate estimates of population densities in the areas surveyed. This allowed us to determine a new total population estimate for the species. The 2019 population estimate is 20,110, a sixfold increase on the 2014 estimate.

The 2019 population estimate provides a rigorous data set that can be used to determine the potential impact of development projects on local Western Ringtail possum populations, and will assist in understanding trends in the abundance and distribution of the species.

Read more about the survey in our Fact Sheet. Urban design is about creating places for people. Major road projects take a context sensitive design approach to help provide 'infrastructure that considers social amenity, urban form and connects communities' in keeping with state and commonwealth government initiatives such as:

Discover more about Public Art we have commissioned through a number of our transport infrastructure projects.

Our involvement in the Wildflower Capital Initiative

We planned, designed, coordinated and implemented the Wildflower Capital Initiative (WCI) in collaboration with the City of Perth, Botanic Gardens and Parks Authority, Office of the Government Architect, Burswood Park Board, Department of Planning, City of Perth, and relevant local government authorities.

The works involved the planting of approximately 91,000 plants, and was designed to showcase Western Australia's unique flora, creating visual appeal and reinforcing a sense of place for our community and visitors. The works also demonstrate the cost and water savings that can be made by replacing lawns with well designed and interesting plantings using native species.

The feature plantings incorporate existing trees and iconic native species such as Verticordia plumosa, Lechenaultia biloba, Melaleuca seriata and varieties of Anigozanthos flavidus (kangaroo paw). With a focus on celebrating the broader Western Australian landscape and flora, each WCI site features selections of species inspired by the Noongar culture's cycle of the six seasons.

Urban design treatments include hardscaping with various forms of contrasting granite, feature sands and stone in a range of colours and patterns, as well as improvements to major infrastructure including: new cladding on the Graham Farmer Freeway tunnel portals featuring the leaves of a Western Australian grevillea; freshly painted noise walls along Graham Farmer Freeway; and painting of the Mount Street footbridge over the Mitchell Freeway.