There is strong scientific evidence to suggest that human induced climate change can be largely attributed to the burning of fossil fuels, which has increased the layer of greenhouse gases (GHG) in the atmosphere and led to elevated atmospheric temperatures.


The significant growth in greenhouse gas in recent times has led scientists to believe that things like sea level rise, changed weather patterns, and increasing temperatures are already in the system and will accelerate. While changes in climate are set to continue throughout this century and beyond, impacts are of concern in existing planning and design time-scales.

Climate change will have a significant impact on transportation, affecting the way we plan, design, construct, operate, and maintain our infrastructure. Decisions taken today, particularly those related to the redesign and retrofitting of existing infrastructure, or the location and design of new infrastructure, will affect how well our network is able to adapt to climate change into the future. Focusing on the problem now will help avoid costly future investments and disruptions to operations.

Main Roads is determined to play a lead role in responding to the challenges and opportunities associated with Climate Change and will progressively review its Standards, Guidelines and Policies to address these. Fundamentally our response will be to employ a "what if" scenario approach to decision making, to better appreciate the risks that might be placed on existing and future infrastructure, and to incorporate greater flexibility to accommodate change where appropriate to do so.

A study undertaken by the Swan River Trust in Western Australia (Potential Impacts of Climate Change on the Swan & Canning Rivers)1 concludes that sea level in the south west of the state will rise by 220 - 330mm in the next 20 years or so, 280 - 430mm by the Year 2070 and 350 - 550mm by the Year 2100 (B1 emmission scenario excluding future rapid dynamic change in ice flow).. The worst case scenario suggests that the rise may be significantly greater by the end of the century if collectively the world population continues to generate GHG consistent with current trends.


CSIRO and the Bureau of Meteorology, 2015, have published a high-level document 'Australian's Changing Climate' summarising many aspects of climate change in Australia. This document states that the average rate of relative sea-level rise for Australia from 1966 to 2009 was 1.4mm/year. Under certain circumstances, higher sea-level rises than these may occur.

Until now, the possible impacts of climate change on sea level and drainage near coastal areas (which is where most of the population in WA resides) have not been considered during our planning and design processes. Given that there is a large body of scientific work suggesting that these changes will become much more evident within the design and planning horizons that Main Roads uses for future infrastructure development, the planning and design of roads and bridges in coastal regions should now include consideration of an anticipated rise in sea level.

It is now a requirement that the implications of a 300mm sea level rise for roads (900mm for bridges particularly those which can control navigation clearance) be considered as part of planning, design and construction considerations for all rehabilitation and expansion projects near coastal areas. This shall be confirmed in all Design Reports. These values consider infrastructure design life and align with Department of Transport’s coastal planning document (Sea Level Change in Western Australia)2.

Note that in September 2010 the WA Planning Commission updated the sea level rise value for use in coastal planning to 0.9m by the Year 2100. This has the potential effect of increasing the horizontal set-back for a new development on a sandy coast to about 150m.

In November 2011, Main Roads completed a report identifying highways and main roads that may be at risk due to a rise in sea level. As part of this report, analysis was also undertaken on coastal communities to assist Local Authorities in identifying local roads at risk.

We have assessed that Main Roads bridge structures have sufficient resilience built into traditional structural design solutions, that an increase in temperatures of the order of that anticipated (up to 7o C by the year 2100) is unlikely to have a significantly detrimental affect on their structural sufficiency, the associated expansion plates, bearings or guardrail. However, increased temperatures may affect the operation of finger plates due to increased expansion which may lead to jamming. It would be appropriate for future maintenance processes to ensure that this aspect is specifically taken into account.

The life of a well designed and constructed sprayed seal is limited to the time when it no longer provides a continuous waterproof surface to the underlying pavement (cracking) and allows surface water to enter the road base, or it starts to lose cover aggregate by traffic attrition (stripping).

However, the viscosity (or hardness) of the bitumen at which distress occurs depends on the minimum temperature in the region. For example, an onsite bitumen could harden to (say) 6.0 log Pa.s in Kununurra, but since the winter is warm, the bitumen would not be hard enough to crack or lose stone adhesion. By comparison, in Albany the winters are colder and the same bitumen would crack, since it would become 'brittle' at the low winter temperature.

Using information provided by the CSIRO, we have applied projected changes in temperature over the next century to the ARRB model and generated a graph of potential seal life reductions for each Region. Of note is that the anticipated reduction in seal life is greater in the generally cooler, southern regions.

The anticipated reduction in seal life due to temperature effects is less than might otherwise be expected - particularly over the next 20 years. However, the issue will be periodically reviewed as more information becomes available, so that adjustments in seal / reseal frequency can be accommodated in the future.

Note that the modelling behind the graph is based upon binder deterioration due to temperature/oxidation. It does not account for bitumen additives, seal damage, or other early problems to a seal that may occur due to, for example, shear caused by heavy vehicles turning at intersections. 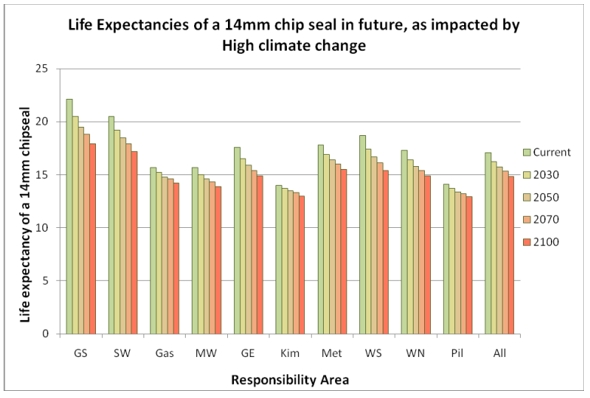 
Figure 1 summarises the current and anticipated life expectancy of a 14mm chip seal in each of the ten Western Australian Regions. For example, in Great Southern, South West and Wheatbelt South regions, a reduction of 1 to 2 years in seal life may be expected within the next 20 years, and a reduction of up to 5 years by the end of the century, when compared to current reseal frequency.

Recognition of the risks associated with climate change is required for planning new infrastructure and mitigating the potential damage to existing infrastructure. 'A Guide to Flood Estimation' published by ARR (Australian Rainfall and Runoff) in 2016 provides practitioners, designers and decision makers with an approach to address the risks from climate change in projects. There is now widespread acceptance that consideration of the impacts of climate change needs to be addressed in MRWA design processes.

Australia's changing climate represents a significant challenge to the infrastructures and the environment. Australia has already experienced increase in average temperatures over the past 60 years, with more frequent hot weather, fewer cold days, shifting rainfall patterns and rising sea levels. Statistically significant increases in rainfall intensity have been detected in Australia for short duration rainfall events and are likely to become more evident towards the ends of 21st century (Westra et al, 2013).

Climate change projections released by CSRIO and the Bureau of Meteorology, 2015 show that an increase in precipitation intensity is likely in the future. That is a warming climate can lead to decreases in annual rainfall and increases in flood producing rainfall . ARR recommends an approach based on temperature scaling using temperature projections from the Climate Future Web Tool developed by the CSIRO. Further details can be found at the Climate Change in Australia Website. It is recommended that Intensity Frequency Duration rainfall data is adjusted for future climate change using the method outlined in Book 1, Chapter 6 of ARR A Guide to Flood Estimation 2016 .

Main Roads is seeking to minimise the risk to our road and bridge assets (and the services they provide to the community) from damage or disruption associated with climate change. The information above will assist practitioners to consider some of the impacts that are most likely to affect that infrastructure. Additionally, the Climate Change Risk Assessment Guideline is available to assess treatment actions that our standards and guidelines do not directly address at this stage.

The following resources will assist in estimating carbon emissions and can be used in project approvals and/or Environmental Impact Statements. The Green House Gas Assessment Workbook for Road Projects was developed to provide a more consistent platform of benchmarking for State road agencies: