These Guidelines set out the recommended geometry and layout of signs and lines for a number of common traffic management devices in use in Western Australia.  The guidelines should be read in conjunction with other reference material such as the Austroads Guide to Traffic Engineering Practice series, with particular reference to Part 10 - "Local Area Traffic Management", Main Roads Technical Design Criteria, the AS 1742 series of Standards and the Bikewest Guidelines for the Design of Bicycle Facilities.  The document for the Main Roads WA course "Cycling Infrastructure Course" also provides guidance on good traffic engineering practice with respect to cycling facilities.

The guidelines are not limited to consideration of traffic control devices in the Perth Metropolitan area, but have application in both rural and country-urban situations.

These guidelines, along with the material referred to above, supersede the document "Guidelines for Local Area Traffic Management", Pak-Poy and Kneebone for Main Roads Department Western Australia, 1990.

1.2. Objectives of the Guidelines

The objectives of the guidelines are to provide a resource document that reflects best practice, allowing practitioners to develop meaningful traffic management schemes that:

The Guidelines are intended to provide an overview of Traffic Control Devices for all interested persons while guiding qualified and experienced traffic engineering personnel in the development of detailed design for geometric elements and signs and lines. They are not intended to replace professional judgment and ability.

1.3. Compliance with the Guidelines

Whilst there is no compulsion to comply with the recommendations of these Guidelines except in those areas where Main Roads has final responsibility or legislative and statutory requirements exist, practitioners are urged to carefully consider the objectives of these Guidelines before proceeding with alternative practices. The erection, modification or removal of traffic control devices involves changing the road environment and this requires practitioners to meet any applicable statutory obligations and the common law "duty of care".

These Guidelines have been developed following a review of national and local practices and incorporate 'best practice' principles from both these sources.

The objective in producing these Guidelines should not be seen as a deterrent to innovation in the design of traffic management devices. The consistency sought is in the application of uniform design principles, in the signing and linemarking of devices and in taking a common approach to the continuous improvement of the road environment.

There exists a large amount of reference material pertaining to the various aspects of Traffic Control Devices including Design Guidelines and Australian Standards.  It is not intended that these LATM Guidelines replace or restate existing industry accepted standards, guidelines or practices.

"Guidelines for the Design of Bicycle Facilities", Bikewest Western Australia, Department of Transport

When designing traffic control devices, consideration should be given to the functional classification of the road/roads as well as:

Generally, the following issues should be addressed in the design of LATM devices.

LATM devices can improve the overall safety and amenity for cyclists by reducing traffic speeds and volumes.  However, individual devices can obstruct bicycles or increase the potential for conflict between bicycles and vehicles.  The design of LATM devices should consider the following, particularly on routes with a high bicycle patronage, or on routes that are likely to attract high bicycle patronage as a result of future development or as a result of the provision of safer cycling facilities:

A well designed roundabout is a safe and effective form of intersection control that can be installed on both four legged and three legged intersections. Roundabouts have been used extensively in Europe, the UK and in Australia, and are generally found by most road users to be one of the more 'acceptable' forms of traffic control. However, roundabouts do present problems for cyclists, pedestrians and people with disabilities and should be avoided at high pedestrian usage intersections such as those near schools, unless appropriate measures to accommodate vulnerable road users (e.g. use of school crossing wardens) are implemented.  Roundabouts reduce the relative speeds of conflicting vehicles by providing impedance to all vehicles entering the roundabout. The safety performance of roundabouts is well proven and if designed and applied correctly, a roundabout can be expected to be better than other forms of channelisation. Whilst roundabouts may not reduce overall crash numbers at a location, they generally reduce the severity.

When designing a roundabout, consideration should be given to the functional classification of the intersecting roads as well as:

The Austroads publications "Guide to Traffic Engineering Practice, Part 6 - Roundabouts and Part 14 - Bicycles" and the Main Roads Roundabouts Design Guidelines should be referred to for further information regarding this type of treatment.

When designing geometric elements and signage and linemarking for roundabouts, the following should be considered; 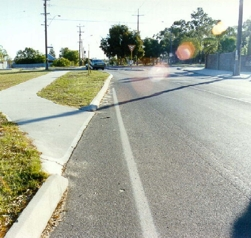 Roundabouts can be used satisfactorily at a wide range of sites, although they perform better at the intersection of roads with roughly similar traffic flows.

Entry Statements are designed to provide visual and tactile clues to drivers, alerting them that they are entering a driving environment that is different from the one they have just left. They are commonly used at the junction of Access roads and Distributor roads particularly as part of LATM schemes. They may be constructed flush with the surrounding pavement or incorporate a raised plateau section.  Entry Statements are also commonly used at the boundaries of differing land uses, for example at the interface of residential and commercial properties or on either side of a school. Entry statements may also be used mid-block to designate a change in speed environment.

When designing Entry Statements, the following principles should be borne in mind: 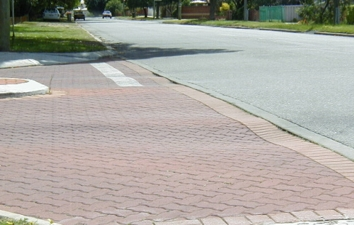 Localised depression at the interface between two different pavement materials, resulting in a potential cycling hazard

3.6 Threshold Entry Statements - When not to use Road humps are used to moderate vehicle speeds by the introduction of vertical displacement either in the form of a raised curved section constructed across the line of a carriageway or a raised plateau structure. They are normally located on access roads, which are residential in nature and have only very limited use on Distributor status roads. Frequently they are used in series along a street to maintain low vehicle speeds.

For road humps to operate efficiently and safely, the following design principles should be adhered to:

A slow point is a device intended to reduce vehicle speeds by the creation of a short narrow section of carriageway that must be negotiated at low speed. Angled slow points can be either two lane, with or without an angled central median, or one lane. The effectiveness of an angled slow point is dependent on the degree to which the device is angled to the through roadway.Two lane devices generally only maintain deflection if they are constructed with a central median. Where road widths are sufficient, angled slow points can incorporate parking bays on the approach and departure lanes either through the use of lane narrowings and kerb extensions or marked bays. Where road widths are restrictive it may be necessary to undertake minor widening to ensure an effective deviation is created. Parallel and double offset slow points are generally single lane devices, although two lane parallel slow points are often found in association with continuous treatments incorporating parking facilities.

Lane narrowings and kerb extensions are also considered to be horizontal deflection devices and are typically used to reduce speeds, improve delineation and minimise pedestrian crossing distances. In some situations kerb extensions are staggered along a street to create a meandering carriageway and embayed parking. They can be used in isolation or in combination with mid-block median treatments, roundabouts, road humps or other horizontal displacement devices.

There is no set standard design geometry for angled or parallel slow points and this allows the flexibility to custom fit these devices to a number of unique situations.

As there are many variations possible, it is important that specific design principles are adhered to.

Driveway links involve the creation of a serpentine travel path at an intersection or midblock and is typically accompanied by landscaped verges.

Driveway links should be designed so that the following issues are considered:

7.6 Modified "T" Intersections - When Not to Use

Blister islands are elliptically shaped islands constructed mid block to restrict traffic speeds. They are commonly used in situations where the tight configuration of angled slow points is not acceptable. This situation commonly occurs on bus routes and higher classification roads where provision needs to be made for commercial traffic.

Blister island geometry can be modified to suit specific circumstances; however the following basic design principles should apply:

8.6 Blister Islands - When Not to Use 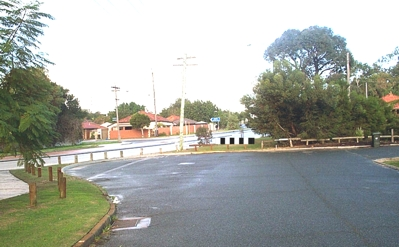 Full road closures provide practitioners with the opportunity to regulate the movement of traffic through streets by way of mid block closures, or through intersections by the closure of one or more legs of the intersection. In this manner they can be successfully used to deter 'bypassing' traffic from local streets or to reduce conflict points on intersections thereby reducing crash frequencies.

When designing a full closure the following principles should be followed:

Where unacceptable levels of traffic transference into adjacent streets is expected.

Median islands are commonly used to regulate the movement of traffic and to provide refuge for staged pedestrian crossings. They are also used on approaches to bends or through tight bends on access roads.  Mid block they are commonly used in series with painted medians to provide a continuous separation along a road without unduly impacting on property access.

Median islands are designed in accordance with the general principles governing channelisation design.  Important considerations are:

"Care needs to be taken that the introduction of LATM treatments that narrow the road carriageway width do not create safety problems for cyclists.

Practice should be that lane widths are either designed to be wide enough in all instances to allow the safe passage of a cyclist and a vehicle side by side (3.7m or more) or narrow enough to permit the passage of a vehicle or bicycle only (3.0m or less).  Widths in between these two extremes create squeeze points and result in conflicts."

Bearing this in mind, carriageway widths adjacent to median islands shall consider the needs of cyclists and, where warranted, be wide enough to allow a cyclist and vehicle to pass side by side.  If the route is a bus route, additional width may be required.  The following minimum widths should be provided:

11.6 Median Treatments - When Not to Use

Standard design envelopes are used to design the horizontal displacement necessary through devices such as roundabouts, blister islands, modified "T" junctions and slow points to reduce vehicle speeds to a desirable level.

The tighter the horizontal curvature at a roundabout or other form of slow point, the slower will be the speed at which drivers traverse the device. The design of stand-alone devices is governed by the initial choice of desirable 85th percentile speed through the device. Once this is known, geometry that restricts the virtual radius through the device can be prescribed so as to achieve the desired speed.

Graphs and tables from the American Association of State Highway and Transportation Officials' (AASHTO) "A Policy on Geometric Design of Highways and Streets" relate horizontal curvature to operating speed based on the formula:

V is the speed of travel around a curve (km/h),

e is the superelevation rate, and

f is the side-friction factor.

Applying this formula to a range of speeds and assuming side friction factors recommended by AASHTO and a range of superelevation values, gives the following result.