Upgrading Roe Highway interchange to reduce congestion and improve access to the local area. Construction is due to finish by August 2021.
Share this project:

Karel Avenue experiences significant traffic during peak periods. The problem will likely get worse due to residential developments in surrounding areas and development of the Jandakot Airport precinct.

To upgrade Karel Avenue, we plan to:

On track for interchange opening

The project is on track to be more than 85 per cent complete by the end of 2020 and completely finished in August 2021.

The new Roe Highway interchange at Karel Avenue and the widening of Karel Avenue from Farrington Road to the Berrigan Drive roundabout will reduce congestion and improve access to Roe Highway, Kwinana Freeway and other major transport routes for residents and commercial traffic.

From 29 October, all on and off ramps around the Karel Avenue Bridge over Roe Highway will be completed, enabling movement east and west along Roe Highway, and north and south along Karel Avenue.

The current restricted access to Roe Highway eastbound, and Karel Avenue northbound, will be lifted. Traffic in this area on Karel Avenue will remain single lane in each direction to enable finishing works at the roundabouts, but will travel on the permanent alignment. By late December this year, two lanes in each direction will be open on this bridge.

In September, four 44-metre precast beams that make up the base for the expanded bridge deck across the railway line were successfully installed (below) over two days requiring a weekend closure of the bridge on Karel Avenue.

Earlier this month, concrete was poured to the bridge deck and between 2 and 9 November, kerb and drainage works will be carried out and asphalt laid. On 20 November, the traffic will be switched to the east side of the bridge and the process will be repeated on the western half. On 26 October, the principal shared path (PSP) was opened around the Karel Avenue and Roe Highway interchange allowing cyclists and pedestrians to have seamless access to the Kwinana Freeway and Roe Highway via the new underpass opened in July 2020.

The remaining PSP around the rail bridge and the approach to Berrigan Drive is also open but with a temporary surface and is scheduled for completion in August 2021.

The Berrigan Drive and Karel Avenue roundabout is now complete. The roundabout has been designed to provide a sustainable, low maintenance and water wise feature at the busy intersection.

The landscaping includes Grass trees and a feature native eucalypt planted within a bed of stone and organic mulch arranged in a pattern that provides a striking aesthetic and visual cue for aircraft using the adjacent Jandakot Airport. A similar design will be implemented at the two other roundabouts either side of the Roe Highway bridge.

The roundabouts will allow two lanes of traffic in each direction along Karel Avenue, and ease congestion during peak times for traffic entering Karel Avenue from Berrigan Drive. 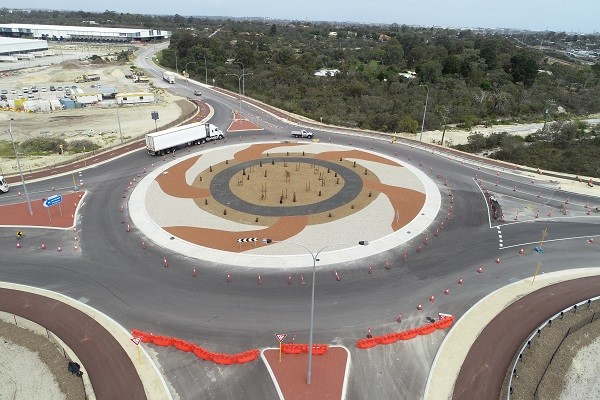 The $28.7 million project is funded by the State and Commonwealth Governments as part of a $2.3 billion package of road and rail infrastructure works.